The Maritime House of Nagu

The Maritime House in Nagu opened in 2010.

The Maritime House in Nagu with it's permanent exhibitions were donated to the city of Pargas by shipping magnate Kaj Engblom and his wife Anita Engblom.
It tells the story of the region's shipping traditions from early 19th century to modern times. From the middle of the 19th century Finland's shipping was concentrated to Åboland and usually involved the whole community from gentries to crofters. During this period Nagu was the single biggest shipbuilding and shipping parish in regards of tonnage and new sailing ships where built each year. The permanent exhibition tells the story of the shipbuilding business, the ships, ship owners and crews through images, objects and text. 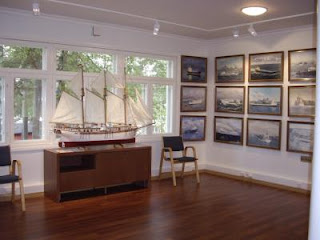 With the turn of the century (1800 - 1900) the steam ship came to compete with the traditional sailing ship and regular transport routes were established between Nagu and the mainland. Well remembered are the steamships S/S Östern and S/S Fix, the latter which could ferry cars.
Visitors can familiarize themselves with the history of these ships complete with Åke Sandvall's detailed miniature boat and ship models.
One of the rooms have been dedicated to Åke Sandvall (1920-1993) the gifted model builder from Nagu. Here the visitor can see several of the extraordinary models Åke built such as the schooner Svan, the salvage ship Protector, the freighter Wiiri and the tanker Esso Finlandia. 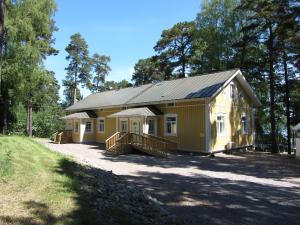 Nagu's shipping during the 20th century is represented by the exhibition of Paulins Rederiaktiebolag, Rederi Engship and Delphin Cruises. The visitor can also get a glimpse on how it is to be a modern seaman and follow the ship's current positions using the AIS data system.